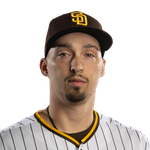 Snell moves to the Padres fresh off a solid year, in which he pitched to a 3.24 ERA and a 1.20 WHIP, with a memorable early exit in the World Series. Snell has a checkered injury history and has pitched just 157 innings over the past two years, so don't expect him to be a big innings-eater in 2021. And, although he'll escape the dreaded AL East, he'll get a downgrade in park and defense, which largely makes the move a neutral one. All that said, Snell has plenty of talent as he's shown throughout his career, and should be able to pile up wins and strikeouts pitching for a strong Padres team. Draft him as an SP2 with upside.