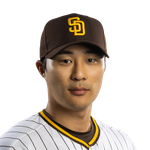 Kim joins a loaded Padres team after a successful career in the KBO. He had a particularly strong 2020 season, slashing .306/.397/.523 with 30 home runs and 23 steals. Although he split time between shortstop and third base in the KBO, he should likely man second for the Padres, which is better for his fantasy value given the relative lack of strength of the position (though the signing of Jurickson Profar does add a few question marks). Kim is younger than most hitters coming over from the KBO - only 25 - and he has the speed and power to reach double digits in steals and homers pretty easily. But he's more of a 15-15 type of player, rather than the potential 30-25 he was last year, and he'll likely bat near the bottom of the order, limiting his plate appearance and runs and RBI opportunities. Draft him as a middle infield option, but with upside.