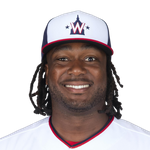 Bell looked like a superstar in the making in the first half of 2019, but struggled for much of the second half of the season and then fell off a cliff in 2020. He slashed a mere .226/.305/.364 and hit only eight home runs. His strikeout and ground ball rates took massive jumps, while his walk rate and launch angle plummeted. Bell blamed his struggles on his swing getting long, and you could tell by how often he changed his stance and swing last year that he simply could not figure things out. Now with the Nationals, the 29-year-old Bell will have a chance to revive his career. We've seen the upside, so he's certainly worth drafting at a discount, but he's much more of a borderline corner infielder than a starting-caliber first baseman.