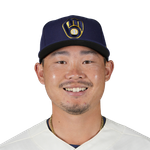 Hiura looked to be on the verge of superstardom heading into 2020, if he could just cut back on his bloated 30.7% strikeout rate. Instead, he struck out more than ever (34.6% of the time), en route to a league-leading 85 strikeouts. That led to a massive drop in production, notably in batting average, which fell from .303 in 2019 to .212 last year. Hiura was never a high-strikeout player in the minors. He never struck out more than 26.3% in any level and he had an overall strikeout rate of just 21%. If he can manage to cut down on the whiffs, he should be a top option at second base given his power and speed, but for now, drop him down your draft board a bit from where he was heading into 2020. He's still a borderline top-five option, especially since he will add first base eligibility after the Brewers signed Kolten Wong, but exercise more caution.