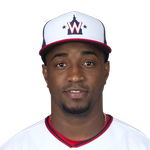 There were plenty of warning signs with Robles' batted-ball data heading into 2020, and they're only greater now after an abysmal season during which he slashed .220/.293/.315. The MLB average in barrel rate and average exit velocity are 6.4% and 88.3 MPH, respectively. Robles clocked in at 4.8% and 83.3 MPH in 2019, and then fell to a ridiculous 1.7% and 82.2 MPH in 2020. His continously poor contact limits any upside, but it's worth noting that he still hit 17 homers and stole 28 bases in 2019 despite it all. Robles is still just entering his age-24 season, so massive long-term growth is still certainly on the table. But for now, it's impossible to justify drafting him as anything more than a fifth outfielder in mixed leagues.