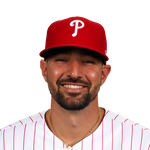 Castellanos hit for plenty of power last season with the Reds, but it was far from the full breakout season many expected. His strikeout rate jumped to 28.5%, his batting average cratered to a career-low .225, and his wOBA was his worst mark since 2015. But Castellanos was also the victim of some pretty terrible luck, given that he had an expected batting average of .273 and a strong 46.7% hard-hit rate. With a full year in Great American Ballpark, Castellanos should fully live up to the hype he had coming into the 2020 season if he can just have even normal luck. Draft him with confidence as a likely strong four-category contributor.