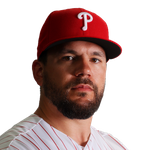 Schwarber gave back many of his 2019 gains last year, seeing a rise in strikeout rate (29.5%) and his batting average dropping to an abysmal .188. But Schwarber's season was far from linear: over the first half of the season, he slashed .230/.343/.448, but those numbers dropped to .154/.279/.346 over the second half. At the same time, he continued to hit the ball extremely hard, with a 92.8 MPH average exit velocity, which was top 5% in the league. Given his consistently hard contact, the better course of action seems to forgive Schwarber for what amounted to an extremely poor 24-game stretch to close out the season. Now batting in the middle of the Nationals lineup with a fresh start and entering his age-28 season, Schwarber should rebound to somewhere between his 2018 and 2019 numbers.