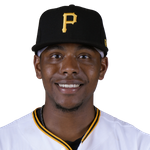 Hayes had an outstanding 24-game run with the Pirates last year, hitting five home runs with an 1.124 OPS and a 55.4% hard-hit rate, which would have ranked seventh best in the majors had he had enough plate appearances. But that was far more offensve production than he had shown in the minors, where he totaled just a .752 OPS with 25 home runs in 461 career games. Hayes makes a ton of contact and should bat near the top of the Pirates order this year, so even if he regresses some offensively, he should still find enough counting stats to be useful. But don't expect 2020's power levels.