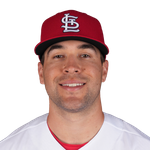 Carlson caught major buzz heading into the season last year as he looked likely to earn an everyday role in the outfield, but he sputtered for much of the season even when he did play, slashing just .200/.252/.364 with three home runs in 119 plate appearances. But he had a successful, albeit brief, post-season, and now again looks ready to claim a starting outfield spot for the Cardinals. Carlson is just 22 years old and has a strong minor-league track record. If he can hold down his spot, he has 25-15 potential, and should hit for a solid average. Given his age and his poor 2020 season, there's some obvious risk, but the draft capital necessary to get him on your team is not prohibitive, and his upside should make him a target in all formats.