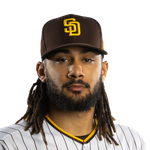 Tatis Jr. has a bit of a shoulder issue, but nothing suggests he'll need to miss any time. He had an outstanding rookie year, but because he had outperformed his Statcast data so significantly, many fantasy managers were worried that his numbers would regress in 2020. Although his batting average did come down (to a still respectable .277), he not only staved off regression, but he improved significantly in most areas. He cut his strikeout rate by 6%, upped his walk rate by 2.5%, and led the league in average exit velocity, hard-hit rate, and barrel percentage. The fact that he's likely to throw in 25-30 steals over the course of a full season is just the cherry on top of elite fantasy production. He's a top-five overall pick with little or no downside and massive upside even off his incredible 2020 numbers, so long a there are no further developments with his shoulder.