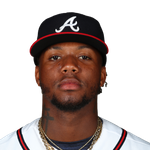 Acuna missed some time last year and batted a mere .250. And thus ends the negative things you can say about him. He walked at an absurd 18.8% clip, which led him to a .406 OBP despite the poor average. He was one of the league leaders in quality of contact, wOBA, and xWOBA, and we now know after the last two years that he will run often on the bases so long as he continues to bat leadoff, which he should. In other words, from a fantasy perspective, Acuna is an absolute monster. He's a top-three pick and will (deservedly) go first overall in many leagues, and there's still upside given that he just turned 23 years old.