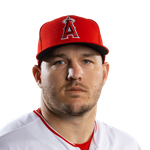 For one of the first times since he took the league by storm, Trout is not the consensus top pick this year. It's hardly his fault, though it's fair to point out some of the negatives with his 2020 season. He batted a career-low .281, and posted his worst walk- and strikeout-rates since 2015. He also stole only one base. But Trout's move down the overall baseball rankings is due more to his competition for the top spot, rather than his numbers. He was still among the league leaders in quality of contact and every expected statcast metric, and was on pace to hit 50 home runs over the course of a full season. Trout is entering his age-30 season, so although we've seen him rebound from poor stolen base years before, it now seems unlikely that he'll ever get back to much past low-double digits. That keeps him out of the top spot in rotisserie rankings, but his incredibly high floor makes him a top-five overall draft pick.