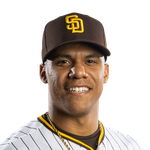 There aren't enough superlatives in the English language to describe what Soto has done in his career given his young age. Had he merely repeated his incredible 2019 numbers last season, fantasy managers would have been ecstatic. Instead, he upped his walk rate from an elite 16.4% to a truly remarkable 20.9%, cut his strikeout rate down to just 14.3%, and batted .351. Soto does not have the speed or baserunning chops to steal 30 bases in a season, which is the only thing keeping him from being considered worthy of drafting first overall. But given what he's accomplished through his age-21 season, it's truly scary to think of how high his ceiling may be. Draft him as a top-five pick and enjoy the ridiculous production.