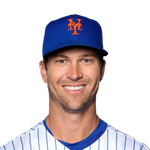 deGrom barely missed out on winning his third straight Cy Young Award last year, but it was yet another dominant season. For the third straight year, he came in with a WHIP under 1.00, an ERA under 2.50, and a strikeout percentage above 31%. deGrom is getting up there in age, but it's worth remembering that he has fewer miles on his arm than most pitcher entering their age-33 season, given that he didn't transition to pitching until late in his college career and missed significant time with injuries during his time in the minors. deGrom has shown no decline in his game, and should hopefully (finally) begin to pile on more wins this year pitching for a better team in front of an improved bullpen. He should be the first or second starting pitcher taken and is an obvious first-round pick.