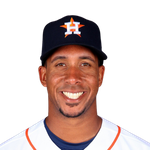 After a few hours where it looked like Brantley was heading to the Blue Jays, he'll instead return to the Astros on a two-year contract. Despite his advancing age, Brantley remains one of the safest players in all of fantasy, batting at least .299 in each of the last six seasons in which he played at least 11 games. He both walked and struck out more than usual last season, but given that he played in just 46 games, there's little reason to draw any firm conclusions from that data. The bigger issue is that Brantley excels in only batting average, and although he'll offer something in each of the other four rotisserie categories, he won't be a difference-maker. Draft Brantley in the middle-to-later rounds if you need an average boost, but there's little upside.