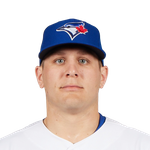 Varsho was optioned to Triple-A, which was mildly surprising, though not entirely unexpected. He saw plenty of action between catcher and the outfield last year for the Diamondbacks, and although he batted just .188, he hit three home runs and stole three bases. That may not sound like much but for a catcher-eligible player in 37 games, it's plenty. Varsho was optioned less because of his talent level and more because the Diamondbacks' roster is pretty full, especially with the signing of Asdrubal Cabrera,. There's a ton of potential for Varsho, given that he was a high-average hitter during his minor-league career, but fantasy managers will need to wait a bit longer for him to become someone to start in fantasy leagues.