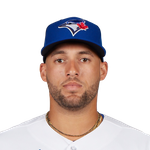 Springer is dealing with a grade-2 oblique strain, and his status is in doubt for Opening Day, though the injury is not expected to keep him out for very long. When healthy, he's a dynamic player. Springer's batting average fell off a tad last year, but once he was past his wrist injury, he was explosive, batting .316 with a 1.033 OPS over the final month of the season. His expected statistics were excellent, as he ranked in the top eight percent of the league in xBA, xSLG, and xWOBA. Now with the Blue Jays and an extreme hitter's park (wherever the Blue Jay play this year), he should once again be in line for a stellar year. Home runs and runs scored should again be plentiful, making Springer a rock solid second outfielder in mixed leagues.