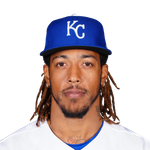 Mondesi will begin the year on the 10-day IL with a strained oblique. When healthy, however, there's no reason to doubt his performance. Even in a shortened year, it was a tale of two seasons for Mondesi. In 35 games in July and August, he batted just .186 with 11 runs, two RBI, no home runs, and eight steals. In his final 24 games, he batted .356 with six home runs, 22 runs scored, 20 RBI, and 16 steals. In the end, Mondesi delivered exactly the type of season that fantasy managers have come to expect, and his 24 steals were eight more than the next highest total. Mondesi won't help in batting average and offers minimal power, but he's an unmatched source of steals. And given that much of his lackluster first month can probably be written off to offseason shoulder surgery, fantasy managers should be able to expect closer to the second-half version of Mondesi rather than the first this year.