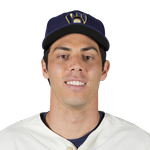 Yelich's 2020 season was, in a word, bizarre. After batting .327 combined from 2018-2019, his batting average dropped to a meager .205 last year. Although he hit the ball as hard as ever, setting career highs in average exit velocity and hard hit percentage, his strikeout rate ballooned more than 10 points to 30.8%. At the same time, Yelich's walk rate jumped up to 18.6%. Unsurprisingly, the reason for the jump in both Yelich's strikeouts and walks was that he simply swung less - just 34.6% of the time after his mark hovered above 44% the previous two seasons. If Yelich takes the same passive approach in 2021, then it's likely that his batting average will remain below what fantasy managers had come to expect. But considering that his season was so out of line with what he'd produced since coming to Milwaukee, fantasy managers should expect far more this season, and feel confident drafting him late in the first round.