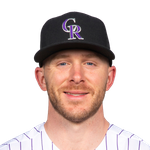 Story had his usual stellar year in 2020, putting up strong overall numbers and offering a rare power and speed combination. As usual, he greatly outperformed his expected statistics, but that's been the norm for Story throughout his career and isn't all that unexpected since he plays in Colorado. Story is entering his walk year, so the chances of a trade, which would diminish his value, remain a possibility. But there are few safer players in the game as of this moment, and he's a locked-in first round pick. The only question surrounding Story is whether he or Trea Turner should be the first shortstop selected in drafts.