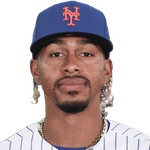 Lindor's season wasn't particularly impressive, as his surface numbers regressed fairly significantly from his previous three seasons. But, under the hood, not much changed. His walk rate and strikeout rate were largely steady, and his statcast data remained on par with his career marks. He also got much better to close the year, batting .285 with a 122 wRC+ over his final 39 games. Just 27 years old and now with a stronger lineup with the Mets, Lindor should put up numbers closer to his 2017-2019 levels, especially since he'll be playing for a new contract after this season. He'll come at a bit of a discount in the second round this year, and he's well worth your investment at that price.