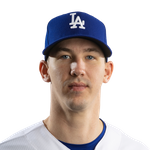 Because the Dodgers wanted to closely watch Buehler's routine and workload, he got a late start to the shortened season, essentially using his first few starts as the end of his spring training. He also dealt with blisters late in the year. All that to say, Buehler's 36 2/3 regular-season innings are, for the most part, largely meaningless. He gave up a few more home runs and walked a few more batters than usual, and he won just a single game. But none of it matters. Value Buehler as you did after his 2019 season - as one of the true stud pitchers in the game. Once the big three of Jacob deGrom, Gerrit Cole, and Shane Bieber are off the board, Buehler should come under immediate consideration, as the type of starting pitcher who can be your fantasy ace.