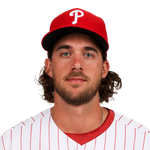 Nola bounced back from his disappointing 2019 campaign, and looked much closer to the 2018 breakout version of himself last year. His set a career mark in strikeout rate (33.2%, which ranked in the top nine percent in the league) and swinging strike rate (13.4%), and brought his walk rate down to just eight percent. Nola also got batters to swing at pitches outside the strike zone at a rate of 38.1%, far better than he had ever done in his career, and they made contact less than ever, at a rate of only 59.1%. The reason for the change was Nola relying far less on his fastball and more on his changeup, which kept hitters off balance and made both pitches more effective. Nola doesn't throw particularly hard, so his success relies much more on command and finding the right pitch mix, both of which he excelled at in 2020. If he can keep that going in 2021, and it's a good bet he will, he should be considered a fantasy ace.