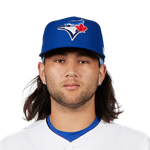 Bichette missed about half the season with a knee injury last year, but was productive when he was on the field, batting .301 with an .840 OPS. His 162-game pace was 28 home runs, 100 runs, 128 RBI, and 22 steals, so he was well on his way to earning his lofty draft price. If there was a wart to Bichette's season it was that his walk rate dropped to just 3.9%, one of the worst in the league. But, given that he had just 128 plate appearances, that's likely just the product of a small sample size, since he never walked at less than a 6.6% clip in his career. Batting in a stacked lineup, Bichette should once again put up strong five-category numbers, and should be one of the first shortstops drafted in fantasy leagues again in 2020.