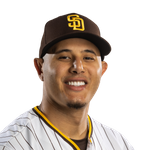 Machado was on pace to set career highs in most statistical categories other than steals after last year's 60-game season. He set career bests in strikeout and walk rates and, most importantly to fantasy managers, batting average, where he checked in at .304. Machado's batting average was earned (he had an identica .304 xBA), and came on the back of him cutting his ground ball rate to a career low 37.2% and his line drive rate to a career high 22%. Machado is still just entering his age-29 season, and will continue to bat in a loaded lineup. Expect some regression from his batting average, but all his other stellar numbers should remain on par, meaning it will be another outstanding season that is worth a second-round pick.