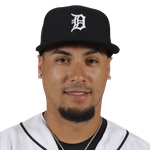 Everything went wrong for Baez in 2020. His already high strikeout rate increased to 31.9%. His already low walk rated fell to an abysmal 3.0%. He swung less, made contact less, and did not hit the ball as hard as he used to. In the end, Baez earned every bit of his .203 batting average and poor counting stats. But how much weight do you put into a 59-game stretch for a veteran like Baez, particularly when he complained that his inability to watch video between at-bats affected his overall performance. The answer is a little, but not all that much. Baez had a stellar three-year run as a reliable power-speed combination, and he'll be just 28 years old this season. The Cubs lineup won't be overly strong, but Baez should certainly put up numbers closer to his 2017-2019 totals than those he put up in 2020.