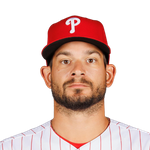 Hand joins the Nationals on a one-year deal after Cleveland declined his option. His velocity declined a bit last season, but the league's collective lack of interest in Hand is surprising, given that he's coming off one of the best seasons of his career, led the league in saves, has been a top-10 reliever over the last five seasons, and is a lefty. Dave Martinez wants Hand to be the Nationals' closer based on his comments, but it's unclear whether he'll be the sole option. The Nationals barely have another lefty reliever in their bullpen, let alone a reliable one, so chances are that Hand will be deployed earlier in the game if the opposing team has multiple left-handed hitters due up. All that to say that Hand is a reliable reliever who you should draft for his overall numbers, but he may provide fewer saves than most traditional closers.