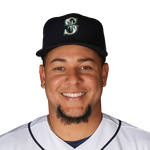 Castillo turned in another excellent season last year, cutting his walk rate and striking out batters at a higher rate than he ever had in his career. His WHIP increased to a career-worst 1.23, but that was largely due to bad luck, as batters hit .232 against him despite an expected batting average of just .212. Nevertheless, Castillo kept runs off the board, largely because he was able to avoid home runs (just five in 70 innings) and limit free passes. Castillo is capable of fronting a fantasy pitching staff, though he's more of a low-end ace, and there are plenty of trade rumors following him around. But, given his reliable production and increased strikeout rate the past two seasons, he can be drafted with confidence.