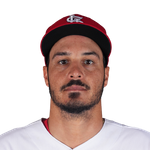 On the bright side, Arenado struck out just 10% of the time, a career-best. On the down side, there was everything else. Arenado batted just .253 and put up a 162-game pace of 27 home runs, 78 runs, 88 RBI, and zero steals. Those numbers won't kill your fantasy team, but considering Arenado's worst numbers over the previous five seasons were 37 home runs, 97 runs scored, and 110 RBI, they were a disaster. The good news, at least from the standpoint of projecting Arenado into the future, is that he was dealing with an injured AC joint in his shoulder for most of the season. In other words, fantasy managers can largely ignore Arenado's poor 2020 numbers, and focus instead on how he will perform now that he's been traded to the Cardinals. Although there's likely to be some dip in his numbers, we've seen hitters leave the Rockies and largely retain their value (or, in the case of DJ LeMahieu, increase their value), The best part is you won't have to pay that first-round price anymore, and if his ADP drops after the trade to St. Louis, it should be easy to turn a profit.