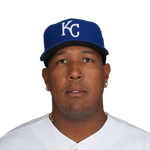 Perez returned from missing all of the 2019 season to put up monstrous numbers. He batted .333 with 11 home runs in just 37 games. Sure, his meager walk rate became even worst and he struck out more than ever, but his strong numbers were absolutely earned. He had an expected batting average of .325, an expected slugging percentage of .624, and barreled baseballs at a significantly higher rate than he ever had before. Perez will be 31 years old this year this year but considering that he's had just 156 plate appearances combined over the past two years (after having one of the heaviest workloads for a catcher over the previous six seasons), he should have some gas left in the tank. Draft him as a top-three catcher without hesitation.