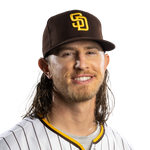 Hader wasn't quite as dominant as he had been the previous two years, largely due to a spike in walk rate and the slightest of declines in strikeout rate. But he still tallied 13 saves, third-best in baseball, and had a miniscule 0.95 WHIP. If you parse it closely, it was just a bizarre season for Hader, who didn't give up a run through his first nine appearances, but subsequently allowed four runs in an inning. He walked five batters in a game, but didn't allow a single walk in any game after that, a span of 11 appearances. In other words, there seems to be a lot of noise in Hader's "decline," which likely would have been ironed out over the course of a full season. Draft him as the top closer off the board with few concerns.