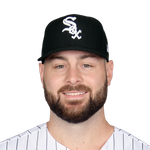 Giolito followed up his breakout 2019 season with a nearly identical 2020 season. His ERA was within .07, his WHIP within .02, and his strikeout percentage within a point and a half. Despite pitching in a homer-friendly park, Giolito has managed to limit home runs, which is a key to his continued success with the White Sox. He won't face quite an easy schedule this year (AL and NL Central pitchers had plenty of sub-par offenses to feast on in 2019), but entering his age-27 season, he should only continue to improve from a skills standpoint. Draft him as an SP1, albeit a low-end one.