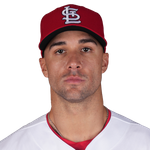 Flaherty ended up with a 4.91 ERA, but that hardly represents his actual performance, given that he allowed nine runs in a three-inning start in September. If you take out that outing, Flaherty had just a 3.13 ERA, and he didn't allow more than three earned runs in any of his eight other starts. Given that Flaherty's season was shorter than most due to the Cardinals' COVID-19 issues, it's fair to essentially throw out at that one abysmal outing, considering his other numbers were relatively consistent from 2019. Indeed, his swinging strike rate improved, as did his K/9 rate and ground ball percentage. With his devastating slider, Flaherty should still be considered one of the top pitchers in the real and fantasy game, and is capable of fronting a fantasy staff.