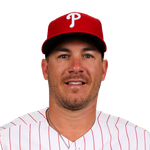 Realmuto fractured the thumb on his throwing hand in mid-February, and is iffy for Opening Day. He is in a tier to himself among catchers when healthy, putting up consistently excellent numbers in what is the thinnest of positions. He had the highest barrel rate and hard hit percentage of his career in 2020, and also walked at a career-best pace. Realmuto is in his age-30 season, so that's getting near the point where catchers begin to decline. But given that he's shown no real slippage in his skills to this point, his numbers shouldn't fall off much in 2021, assuming he has no setbacks and returns on or around Opening Day. Back with Philadelphia now and for several years after signing a five-year contract, Realmuto is the only catcher worth drafting before the sixth or seventh round.