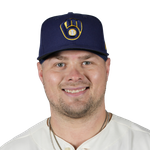 Voit suffered a partial meniscus tear in his knee this spring and is going to be precluded from participating in baseball activity for at least three weeks after surgery. It's almost certainly going to take Voit at least a couple of weeks after returning to baseball activity to return to game action, meaning you should bank on him being out until May 15th or so. When healthy, he's going to produce, however. He has always had a ton of power but last year he left the yard at a ridiculous pace last year, with a 34.9% HR/FB rate, third best in the league. The thing is, nothing about his profile really changed all that much. Indeed, his hard hit rate, barrel percentage, and average exit velocity actually were career lows. The biggest difference was that Voit simply swung more than ever, 52.1% of the time, and correspondingly made more contact, at a 73.8% rate, and actually struck out less than ever before. If Voit keeps the same approach, there's every reason to expect him to put up massive power numbers when he's healthy. That's always been his bugaboo, of course, and since he is already dealing with a significant injury, you can't draft him as a starting first baseman in mixed leagues at this point.