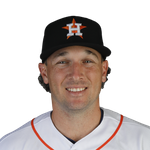 2020 was just a bad season for Bregman, plain and simple. He missed time with a hamstring injury, and generally regressed in every major statistical category. Considering that Bregman will be just 27 years old on Opening Day and had batted .291 with 72 home runs combined over the previous two seasons, fantasy managers can probably just throw out most of what they saw from him in 2020. He'll continue to be an upper echelon option at third base and considering his strong walk and strikeout rates, an even better one in points leagues. He's been battling a hamstring issue for most of camp, but as of now, he doesn't look like he'll miss much, if any, time, so draft him accordingly.