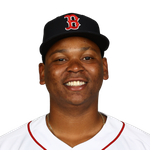 Devers' 2020 season was . . . fine. That's about the best you can say about it. He still hit the ball hard, ranking in the 96th percentile in average exit velocity, and he increased his barrel rate significantly. His counting stat paces from his breakout 2019 season went down, but not dramatically so (other than his batting average), and fantasy managers never felt like Devers was a drain on their teams. But, at the same time, his already poor walk rate declined, his strikeout rate jumped to a career worst, and he didn't even attempt a single stolen base. Devers is just 24 years old, so there is plenty of upside for him. The safest course of action is to build in some natural regression from Devers' strong 2019 season, and pencil him in for roughly 30 home runs and 200 combined runs and RBI. That still makes him an asset to any fantasy team.