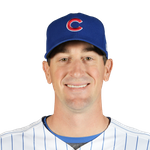 Hendricks is the Rodney Dangerfield of fantasy pitchers in that he never gets the respect he deserves. He's had an ERA above 3.46 once in his career and he's never had a WHIP higher than 1.19. Yes, his strikeout rate is never going to help fantasy managers, but Dave Ross let him go deeper into games last year (Hendricks' 81 innings pitched were among the most in MLB), so he should make up for his lack of strikeout rate with some additional innings. The Cubs probably won't be a great team but the NL Central has mostly weak offenses, so Hendricks should find his way to enough wins to make a difference. Ignore the fact that he outperforms his expected metrics every year. Hendricks is a reliable, high-end SP3 for a fantasy team. Just be sure to take care of strikeouts elsewhere.