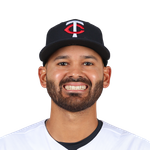 Despite his 5.09 ERA and mediocre strikeout rate in 2019, there was some buzz about Lopez heading into last season because of his outstanding changeup and his ability to keep his WHIP in check. He justified the expectations, cutting his ERA to 3.61 and striking out about a batter and a half more per nine innings than he had previously. He's still volatile, as he has seemingly random games where he lacks command with his changeup and gets hit hard. And he needs another pitch to complement his fastball and changeup. But if he can continue to develop either his curveball or cutter, he could be a true breakout candidate. Draft him as an SP4 with upside for more if his other pitches continue to improve.