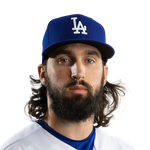 Gonsolin doesn't have a guaranteed spot in the Dodgers' rotation to start the season, and with the team signing Trevor Bauer, it's unclear just how much he'll start this season. His stuff doesn't blow you away, but he's got a 2.60 ERA and a 0.92 WHIP in 86.2 big league innings. And there were gains last year, as he cut his walk rate down and upped his strikeout rate. Gonsolin is an ideal candidate to have on your bench, because if he does get a spot in the rotation, he'll be a popular waiver wire add, and he can add value as a reliever in the meantime. So draft him late, and likely reap the rewards.