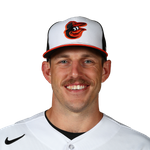 Means's 4.53 ERA and grotesque home run rate are probably going to scare the casual fantasy manager away, but there is a ton to like about him heading into 2021. First, Means had a weird year last season, as he dealt with arm fatigue early and then his father passed away, so his schedule was certainly thrown up into the air at the start. Probably because of those difficulties, his outstanding changeup wasn't effective earlier in the season, but it was back to being his money pitch by season's end. Add to that Means' increase in velocity, his strong finish (1.52 ERA, 30 strikeouts over his last four starts), and his excellent command, and there's a breakout waiting to happen, despite the tough division.