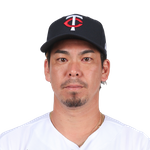 Fantasy managers rejoiced when Maeda was traded from the Dodgers to the Twins, but he surpassed even the loftiest of expectations. In the short season, Maeda went 6-1 with a 2.70 ERA, a 0.73 WHIP, and a 32.3% strikeout rate. In addition to simply being let loose with his innings, Maeda made a tangible change to his pitch mix, throwing far fewer fastball and more sliders and changeups (though his fastball was as effective as it had ever been last year, too). Maeda surely won't be able to repeat his numbers from 2020, as he allowed just a .208 BABIP, had an 80.2% LOB rate, and benefited from being able to feast on solely the NL and AL Central lineups. But even with some regression, he should still be a rock solid SP2, and should be drafted as such.