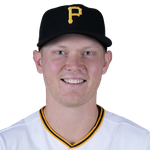 In his brief MLB career, Keller is the author of one of the unluckiest (2019) and luckiest (2020) seasons in recent memory. So, the best course of action is to essentially ignore his 69 major league innings and focus on his stuff and minor league career. If you do that, there's a lot to like. Keller has a mid-90s fastball to go along with an above average slider and curveball. Over more than 500 minor league innings, he had a 25.5% strikeout rate, a 3.12 ERA, and a 1.15 WHIP. He will likely struggle for wins on the Pirates, but he'll also get a long leash given the dearth of reliable options, and he should face mostly weak offenses in the NL Central. Keller likely won't be a star, but he'll probably outperform where you need to draft him.