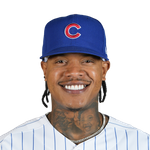 Stroman missed the entire 2020 season after battling a calf injury and then opting out, but he'll return to the Mets after accepting the team's qualifying offer. Stroman's strikeout rate jumped after his trade to the National League, but with a career 58.7% ground ball rate, he'll need the Mets' infield defense to be better than it was in 2019. The trade for Francisco Lindor should help, as should his reported development of both a new split changeup and four-seam fastball. Stroman has always had a decent floor, but now out of the AL East and with some tweaks to his arsenal coming, he possesses plenty of upside as a late-round draft pick.