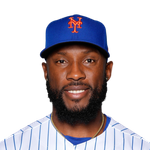 Marte's getting a little old for a player to rely on for stolen bases, and although fantasy managers need to start lowering their expectations as he enters his age-32 season, there should be enough left in the tank for him to be productive. He ranked in the top 11% in sprint speed last year and was caught stealing just twice in 10 attempts. The quality of his contact declined fairly significantly, however, and considering he now plays in Miami, anything more than 15 home runs should be considered gravy. But he'll likely continue to chip in for all five rotisserie categories and be an asset in both stolen bases and batting average, two difficult categories to fill. Again, temper expectations a bit against his historical production, but fantasy managers can still draft him with confidence.