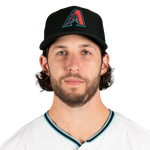 Gallen has a hairline stress fracture of his right forearm at the radial head. He's reportedly going to be able to continue playing catch at a "low stress level" while recovering, though there's no indication of how much time he'll miss. When healthy, he's a solid SP2. He built on his excellent 2019 season with an even more impressive 2020 campaign. Not only did he drop his ERA slightly to 2.75, but he cut way down on his walks (10.8% to 8.6%), which led to a much-improved 1.11 WHIP. Gallen has a 28.5% strikeout rate in 152 MLB innings, and an excellent fastball, curveball, and changeup. There's just not much negative you can say about him when he's healthy other than he might again struggle for wins playing for a mediocre team in a good division. Because of the injury and surrounding uncertainty, you shouldn't draft him as anything higher than an SP4, but he should perform extremely well when he does recover.