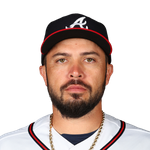 It took a long time but d'Arnaud has finally developed into one of the best hitting catchers in the game, as he was projected to be. It's difficult to quite buy what we saw last year, considering d'Arnaud's batting average (.321) and slugging percentage (.533) were miles ahead of his career marks, and even the numbers that he had put up in recent seasons. With that said, he'll bat in the middle of a strong Braves lineup and be presented with plenty of RBI opportunities, so 15 home runs with 55 RBI should be considered the floor for a healthy d'Arnaud. Those numbers aren't just passable, they're extremely strong for a catcher in fantasy, and he should be drafted as a relatively strong first catcher in mixed leagues.