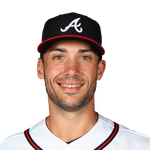 Olson again hit for a ton of power last year, and ranked in the top nine percent of the league in average exit velocity for the third straight season. But he struck out 31.4% of the time, which contributed to a massive average drop to just .195. Olson had a bit of bad luck, as his xBA was .224, but still, it was by far his worst career mark. Although he'll never be a high average hitter, it's a good bet that he'll return something this year closer to his .245 career mark. Combine that with his likely near-40 home run season, and he'll make a fine mid-round selection and starting first baseman for any fantasy team.