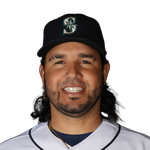 Suarez's power numbers were again strong in last year's shortened season, but his batting average plummeted to just .202. He hit the ball as hard as ever, however, and ranked in the top 9% of the league in average exit velocity. Suarez's BABIP was just .214 (he has a .310 mark), and although he hit more fly balls than usual, there's nothing to suggest that his batting average should have fallen off a cliff. In other words, there's plenty of reason to expect Suarez to hit closer to his .261 career batting average this year. Add to that his potential for 40 home runs and 200 combined runs and RBI, and he'll likely be a value in this year's draft.