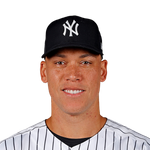 Judge missed about half of the regular season last year with a calf strain, though he still hit for plenty of power when he was in the lineup. He walked and struck out a bit less than usual, but trying to glean anything from a 28-game sample, given Judge's history, is silly. When he's in the lineup, you know you'll get a ton of power and runs scored with a passable average. The key is "when he's in the lineup," however, as injuries have forced Judge to miss significant time over the last three seasons. So long as you factor that into your draft price and select him as an OF2, you'll be happy with the production.